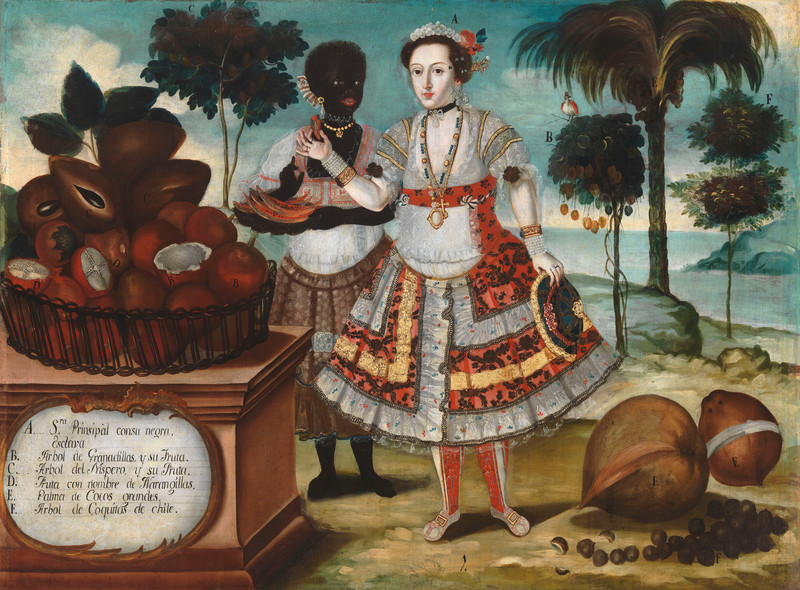 Noble woman with her black slave

This painting forms part of a series of six painted canvases created by Quito master Vicente Albán in 1783. All six paintings represent local racial types surrounded by the flora and fauna of the region; a cartouche lists the names of the most salient aspects represented in each painting. Three of the paintings represent male indigenous subjects: one of them a “principal Indian” and the other two notably more “savage” Yumbos. The remaining three paintings represent four different racial/ethnic types of women: an indigenous woman in fine dress, a yapanga (likely a woman of mixed race), and a white “noble” woman with her black slave.

Both the elite woman and her black slave wear lavish ensembles of luxurious textiles and fine jewelry typical of post-conquest dress. Although their attire features mostly Spanish elements, it is worth noting that it also seems to be a local adaptation of Spanish style rather than the exact design of garments worn by women across the Atlantic. Their outfits consist of white lace chemises, wrapped around the waist with a sash, over which a lacy apron is fastened. A flared or possibly pleated, calf-length skirt with lace trimmings sits relatively low on the hips, below the sash and apron. The skirt seems to correspond to the garment that Jorge Juan and Antonio de Ulloa described in 1748 as the faldellín, “open in the front, with the one side overlapping the other, and ostentatiously decorated,” which appears to have been commonly worn by Spanish and mestizo women in eighteenth-century Quito (368). This gathered skirt received a variety of names throughout the history of its existence, including that of bolsicón in Quito (Middleton 2018). Over their clothes, all three women wear a variety of lavish jewels, made up of fine metals, pearls, and gemstones.

It is precisely in the details of their jewelry and the textiles of their outfits that the differentiation between these female racial types may be seen. The “superior” race of the white woman is represented in the golden crucifix that hangs from one of her necklaces, which represents her Christianity and connotes her superior degree of “civilization” because of her religion and her apparent Spanishness. Her sash is of red color adorned with small, black floral motifs, which would have been embroidered, woven into a brocaded fabric, or even printed at the time. A larger black, floral pattern over a red ground composes the main body of her skirt, which seems to be trimmed with gold brocade (?) and white gauze or lace with tiny petals of blue and red color. Her lace blouse also features golden trimmings, her stockings have vegetal designs over a striped red and white ground, and her shoes were probably made of silk with a pattern of red flowers and gold buckles.

She wears a large floral crown and small flower pins, possibly jeweled, and what looks like a small bundle of natural flowers on her head. She sports a pair of girandole earrings, which were fashionable at the time, and a black choker with a sévigny bow under her chin. Her wrists are encased in multi-strand pearl bracelets and golden cuffs with floral (?) motifs. A number of surviving pieces of jewelry and other images from the time reveal the existence of jewels like those worn by Albán’s señora principal in Spanish America. For example, a tiara held by the Denver Art Museum suggests that the floral crown depicted in the painting could have been replaced by a jeweled piece, worn by women of the elite in the eighteenth-century northern Andes. The girandole earrings were highly fashionable towards the end of the eighteenth century, and extant portraits suggest that it was worn throughout the Spanish world, from the Italian Peninsula to the Americas.

Standing behind the white woman, Albán depicted her black slave. Although attired in a much less ostentatious ensemble, she, like her mistress, wears a lavish chemise with lace trimmings and a lacy apron-like garment over her stomach; unlike her mistress, she does not appear to have a sash under the apron. She wears simple pendant earrings of gold and teardrop-shaped stones and two chokers, one of golden beads with an abstract pendant, and another made of small, black (?) beads. Her hair is simply tied back with a brown bow, and her wrists and feet are bare.

Middleton, James. 2018. “Their Dress is Very Different: The Development of the Peruvian Pollera and the Genesis of the Andean Chola.” The Journal of Dress History 2(2): 87-105.