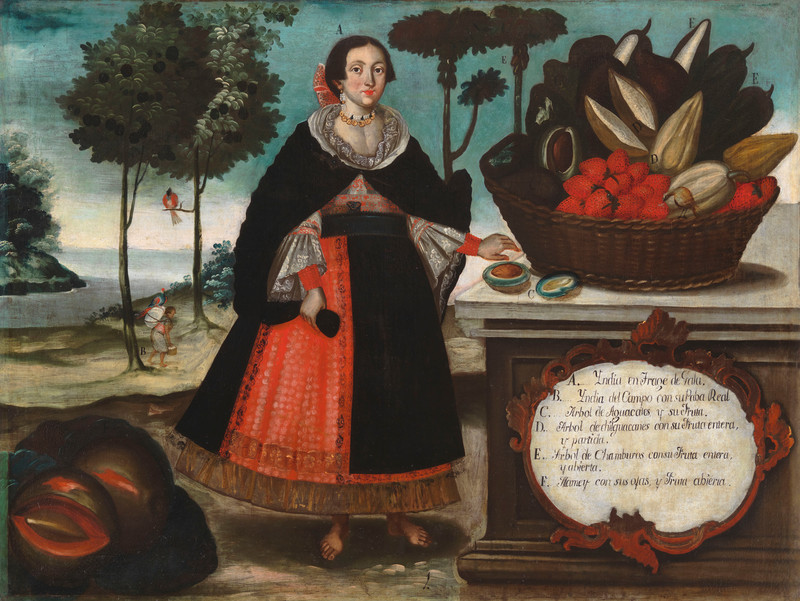 This painting forms part of a series of six painted canvases created by Quito master Vicente Albán in 1783.All six paintings represent local racial types surrounded by the flora and fauna of the region; a cartouche lists the names of the most salient aspects represented in each painting. Three of the paintings represent male indigenous subjects: one of them a “principal Indian” and the other two notably more “savage” Yumbos. The remaining three paintings represent four different racial/ethnic types of women: an indigenous woman in fine dress, a yapanga (likely a woman of mixed race), and a white “noble” woman with her black slave.

Vicente Albán’s representation of an Indian woman in "special attire" (traje de gala) wears a heterogeneous combination of native and European elements of dress. Her upper body is covered with a white chemise embroidered in red with lavish lace details on the collar and the sleeves, worn under a black shawl with sharp horizontal pleats and fastened on the chest with a long metal pin with a large decorative head featuring a rosette with a black (?) bead in the center. Her lower body is covered by a red skirt over a brown petticoat (or pollera), and an open, black overskirt. She wears a black sash that fastens her skirts and, above it, a narrower belt with red patterns. Tucked between the two belts are a small, envelop-like, black bag and another rectangular, red bag, likely of the type used by local indigenous peoples to carry coca leaves (often called a ch’uspa). From her ears hang long earrings made of gold roundels and strips of pearls, and she wears matching necklaces: one consists of two strips of pearls, held together by teardrop-shaped black stones (onyx?); the other of golden, semi-abstract figurines or coins. Thick bracelets made of several strands of red beads adorn her wrists. She is barefoot and her hair is cut short at the front, parted in the middle and combed to the sides, the longer part tied in the back with a large, brown bow with white trimmings and floral motifs of contrasting colors.

The white chemise with lace trimmings and the layered skirt are the most salient elements of Spanish dress covering her body. The chemise, in particular, was a luxurious undergarment worn by European elites to show off their status and wealth. But above the garments of Spanish origin, she wears a number of elements of Pre-Hispanic, mostly Inca dress. Her shawl is likely a lliklla, typically of rectangular shape, which would have likely been made of cotton or camelid fibers before the arrival of the Spaniards and worn pinned on the chest by women in some areas of the Inca empire (Phipps 2004, 21). By the early eighteenth century, as the Spanish travelers Jorge Juan and Antonio de Ulloa attested, the lliklla would have also been made of locally woven wool or bayeta de la tierra (Juan and Ulloa 1748). A Spanish adaptation of this garment, however, seems to have evolved by the time Albán painted his india, since sharp pressed pleats were unknown to pre-Hispanic dress, but they appear to be an essential aspect of the design of her shawl (Rowe and Meisch 2011, 311).

The lliklla would have been fastened on the chest with a long metal pin, usually made of silver or gold and often with a decorative head, usually called a tupu or a ttipqui (Phipps 2004, 21). These garment pins were commonly used in the pre-Columbian Andes to fasten tunics and shawls, and garments generally, which were not tailored or provided with buttons and fastenings, as were most European clothes at the time. Most garment pins nowadays are called tupus, although, as Elena Phipps argued, there is a difference between a tupu and a ttipqui: the former was meant to fasten the anaku while the second, having a shorter shaft, would be used exclusively to fasten the lliklla. A number of extant garment pins reveal the delicate craftsmanship with which they were created, often made of silver and featuring decorative heads. The double belt was also inherited from the Incas, who often wore a wide belt called mama chumbi under a long, narrow belt called wawa chumbi. The red patterns on her wawa chumbi are likely colonial references to tocapus, geometric motifs likely related to the display of social status and rank under the Inca. The black overskirt, called anaku or aksu, was an evolution of Inca dress that occurred after contact with the Spaniards and years of colonization. Originally, the anaku was “a full-length wrapped dress … secured by shoulder pins and a belt” (Rowe and Meisch 2011, 5). By the eighteenth century, it had shortened to be worn over a skirt or tunic, open at the front, which was often called a half-anaku. Finally, Lynn Meisch has suggested that the beads of her bracelets were likely of Spondylus shell, a highly desired material among Andean cultures, often associated with notions of fertility and abundance. It is worth noting that this indigenous woman’s dress contrasts strongly with the outfit worn by the india del campo featured in the background of Albán’s painting (Rowe and Meisch 2011, 179).

While the protagonist of the painting is attired in a luxurious, perhaps lavish outfit, the india del campo wears a simple, light brown tunic (perhaps of coarse wool) and a red sash or chumbi around her waist. This suggests that Vicente Albán’s Yndia en trage de gala was indeed wearing special attire and that she was of high status. This is also hinted by the fact that she appears wearing elements of significant social importance to the Inca, including the tocapus on her belt, the large tupu, and her fine jewelry. It seems clear, therefore, that Albán intentionally depicted her so as to convey her relatively high status within Quito society.